The Life and Times of President Reagan 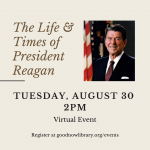 Join us on for a VIRTUAL presentation on The Life & Times of President Reagan on Tuesday, August 30, at 2PM via Zoom.

Ronald Reagan, born in Tampico, Illinois in 1911, considered himself a Californian at heart. Learn about President Reagan from his boyhood in Dixon, Illinois to his rising star power as a Hollywood actor, then his shift into politics in the 1950's; leading to his election as the Governor of California and culminating in his 'role of a lifetime,' President of the United States. Take a tour of his Presidential Library in Southern California and glimpse the many facets of our 40th President. His Library is perched on top of a Hill overlooking the Pacific Ocean, one hour north of Los Angeles where you can see the real California, the one that President Reagan loved and where his final resting place is. Yours is a special invitation to see a unique side of Ronald Reagan as told through the many artifacts and displays in his Presidential Library. Led by Carol Cohea, Education Specialist at the Ronald Reagan Presidential Library and Museum.

Register HERE. Registrants will receive a link to access the Zoom meeting via email.