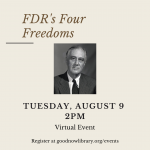 Join us on for a VIRTUAL presentation on FDR's Four Freedoms on Tuesday, August 9, at 2PM via Zoom.

On January 6, 1941, Franklin Roosevelt shared with the country his vision for a world founded on “four essential freedoms" -- freedom of speech, freedom of worship, freedom from want, and freedom from fear. August 9 marks the 77th anniversary of the dropping of the second atomic bomb ending World War II and bringing about the new world order based on FDR's Four Freedoms. This session brings into clearer focus the vision he held for all the world. Led by Jeffrey Urbin, Education Specialist at the Franklin D. Roosevelt Presidential Library and Museum.

Register HERE. Registrants will receive a link to access the Zoom meeting via email.