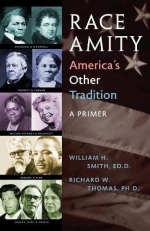 William H. Smith, E.D. is the Executive Producer and Senior Writer of public television documentary An American Story: Race Amity and the Other Tradition and co-author of its companion book Race Amity: America’s Other Tradition. He is the founding Executive Director of the National Center for Race Amity and recipient of the Black Filmmakers Hall of Fame Award. Sudbury residents will also recognize him as the former principal of the Curtis Middle School.

By sharing healing, inspirational stories of the power of race amity, the documentary explores the moral counterweights to the tradition of racism in America and how we can move together towards unity and love. Created by WHS Media Productions LLC, the film discusses the “better in us” perspective needed in the current climate of disunity across racial, religious, and political lines.

Registration for this event has now closed.